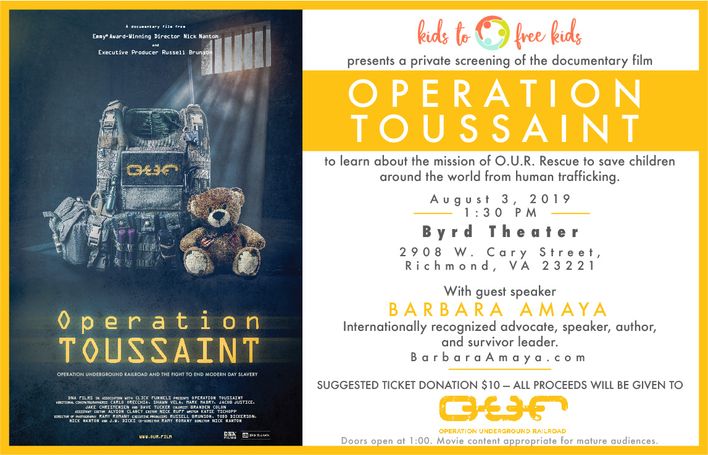 presented by Kids to Free Kids

A minimum donation of $10 per ticket is suggested, and all proceeds will be given to Operation Underground Railroad, which is a registered 501(c)(3).

Operation Toussaint is a documentary that follows former special agent Tim Ballard on his journey to abolish modern day slavery. Tim Ballard left his post as a special agent for the U.S. Department of Homeland Security to form Operation Underground Railroad and go undercover to rescue child sex trafficking victims that he couldn't save when bound by government restrictions. Join Tim and his special forces team as they go undercover in Haiti to bring a ring of sex traffickers who bribed their way out of jail, to justice.

We are also honored to welcome Barbara Amaya, who will share her story of how she was trafficked for 10 years in the United States. Barbara is an anti-trafficking advocate, speaker, trainer, author, and survivor leader in the movement to end modern-day slavery and human trafficking. Barbara spoke at an independently organized TEDx event, which has been viewed over 712,000 on YouTube.

This event is presented by Kids to Free Kids. All proceeds from the event will go to Operation Underground Railroad, which is a registered 501(c)(3)

“You are amazing Riley!”

“Thank you for everyone's efforts!”

“Keep up the good work Riley, Provence, and Merrill!! So proud of you!”

“we already give every month but wanted to support your campaign girls!”

“This is a great thing your doing Riley. Keeo up the great work, Brother Hughes”

“you are awesome! love yoir heart for serving others so well!”

“Thank you Riley for your efforts to save children!”