O.U.R. has rescued 3,800 victims and aSSIsTED IN THE Arrest OF OVER 1,700 human traffickers worldwide.

Since being founded in December 2013, O.U.R. has gathered the world's experts in extraction operations and in anti-trafficking efforts to bring an end to child slavery. O.U.R.'s Jump Team consists of former CIA, Navy SEALs and Special Ops operatives that lead coordinated identification and extraction efforts. Once victims are rescued, a comprehensive process involving justice for the perpetrators and recovery begins.

There are well over two million children currently suffering in captivity in the world today. They are sex slaves. These children are abused daily; thousands of them being imported every year into developed countries like the United States and Canada. These children range from toddlers to teenagers.

While the U.S. government is leading the world in such operations, bureaucracy and jurisdictional limitations can largely hinder it. Most of these suffering children fall outside U.S. jurisdiction and often find themselves kidnapped and abused in regions where the resources to save them are scarce. It is time for private citizens and organizations to rise up and help. It is our duty as a free and blessed people.

O.U.R has partnered with private software and data mining companies who have developed cutting edge tools to locate and detain international child-trafficking organizations. Over the last decade these tools have led to the rescue of thousands of children and to the apprehension of thousands of pedophile captors. (Note: These tools do not violate privacy rights, as they only mine data that has been publicly disseminated by those seeking to sell children). Sadly, these tools have only been utilized in developed countries, leaving those infected nations with the most enslaved children to fend for themselves. Our Underground Jump Team will end this. Partnering with government jurisdictions throughout the world, we will provide these tools free of charge, and we will work side by side with our foreign partners until the children on the other end of that dark Internet line are liberated.

But it doesn't end there. Tapping into vast human intelligence resources developed over many years, our Jump Team will also locate the most active child sex rings in the world. Our Team will then rapidly deploy and, through a series of undercover sting operations (whose methods we cannot reveal publicly), will find and rescue these innocent children. Working hand in hand with our government partners, we will ensure that the perpetrators are held responsible and taken to a place where they can never hurt children again. The children will then be carried off to the best shelters and institutions in the world to begin their rehabilitation. We stay with them through this entire process, until they are healed.

Our mission is straightforward: Using cutting-edge computer technology and human intelligence, we contract undercover teams of former CIA and Special Ops personnel to go into the darkest corners of the world to help local law enforcement liberate enslaved children and dismantle the criminal networks. All public donations go directly to our child rescue operations.

O.U.R. Ambassadors demonstrate leadership in their professions and serve as positive role models through their work. They continue to use their talents and platforms to fund-raise, advocate and empower on behalf of trafficked children all over the world.

I would like to send a check. How do I do that?

No problem! You can make checks payable to Operation Underground Railroad and send it to the address below:

Is my donation tax-deductible?

Your donation is 100% tax-deductible.

Will I get a tax receipt?

A donation receipt will be sent to you at the email address you provide on this form. Please be sure to keep a copy of your receipt for tax purposes.

﻿Who can I contact if I have questions about my donation?

We would love to hear from you! Our team can be reached via email at: info@ourrescue.org 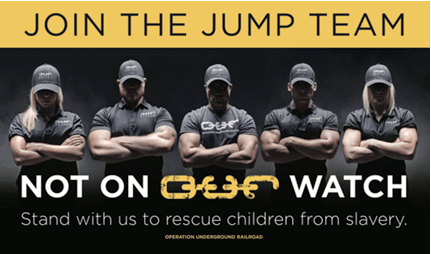